24 years ago I served in the Argentine Army, B Com 602, as a conscripted soldier. It was not my own election because there was a draft at that time in Argentina.

The informal, slang for the mandatory military service is (was) “Colimba”. You would use it like “I am a Colimba” meaning, “I am a soldier”. Or “I’m doing the Colimba”, as in “I’m doing my military service”. The term “colimba” comes from combining the first syllables of 3 different words:

Which is what supposedly you spent 99% of your time doing while serving in the armed forces.

My own personal acronym would be “Limadin“:

I did have my share of running, and yelling and drilling for a month, while I was going through bootcamp:

It was an interesting month, summarized as:

We slept in an abandoned barrack in the middle of nowhere. It had walls and a roof, but all windows were broken or missing. We slept on the floor inside sleeping bags. We were 100 recruits or so.

In between the 10 steps above, there was a lot of instruction: how to salute, the ranks, the jargon, the etiquette. Everyday stuff has a different name in the Army. The doctrine at that time was borrowed from the German Army, so you addressed everyone with a possessive: “yes, my Captain”, “no, my Sergeant”, “yes, my General”. It was intense, and after a week or so you knew everything you had to know, and you acted without thinking, and thought in fractions of a second. Our Sergeant told us:

Which is difficult to translate, but roughly means (in Spanish, there’s a play on the words)

You have to be a ball of nerves, not nervous morons.

I learned to dress quickly, wake up fast, go asleep quickly, sew everything, carry a FAL, clean up a FAL, fire a FAL.

Shortly after my bootcamp, we all went back to our base, where I’d remain for exactly one year. My unit’s mission was to keep everyone connected. This was the BCOM 602 after all (Communications Battalion 602). We were in charge of connecting all Army units, including those deployed in Antarctica, and all UN Peace missions (e.g. Bosnia, Haiti, and others). I remember the thrill of listening to guys stationed in the Antarctic bases.

At that time, a complete overhaul of the communications infrastructure was taking place, and that included a bunch of UNIX based servers. And I spent 1 year learning and working on that. My routine looked like this:

In retrospective, I feel very fortunate to experience all this. I learned a lot, and I met two of the many people that have shaped my life. 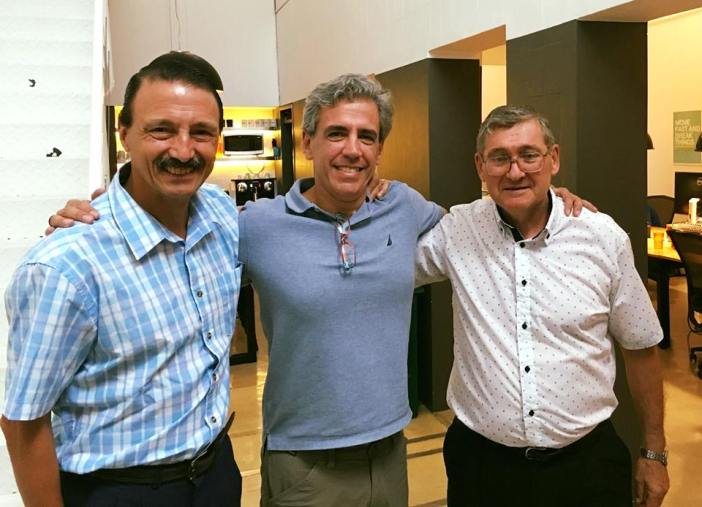 On my right, (then) Captain Alejandro Luis Echazú and on my left side (then) Sergeant Major Angel Luis Puñet. Exceptional people, who taught me different and profound things. And I’ll be forever grateful to them. Both exercised leadership in the way I respect the most: by example. I met them in late 2017 to tell them in person how grateful I am.

I mention them in my blog post on self-made men.

Even though I was a plain low-level soldier, Captain Echazú showed respect, and care. I saw him many times leading his men (and myself) with conviction, passion, and compassion. Everyone (and I mean everyone) in the ranks had the utmost respect for him. I was impressed by the unanimous respect, and authority.

With Sergeant Major Puñet I worked side by side all year long. The most impactful things I remember from him are his resourcefulness and good humor. He’d make fun of everything, and I think I laughed more that year than all the time combined before it. Nothing would stop us from working on cool stuff. We’d beg, steal, borrow, hack, whatever. We got the job done. From him, I learned there’re no excuses. I’ve kept him in my heart since then.