One of the most significant treasures of my childhood is my library. My parents rarely said “no” to books, so I grew up surrounded by many.

One of my early favorites was the “Enciclopedia Estudiantil” from Codex. I inherited it from my mom, and it was not complete, but each book I had (made up of smaller chapters) was a window into beautiful stories and information. 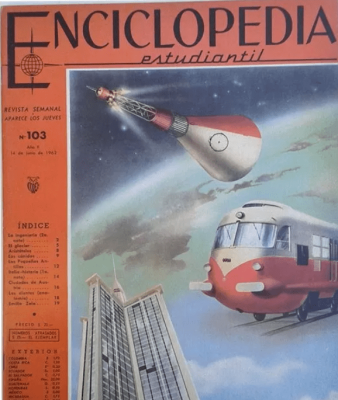 I read its pages many times, and it became handy at school too.

When I was 10(?) I inherited a large set of books from my godfather. Among them were quite a few from the “Robin Hood” collection:

Anyone from Argentina will recognize the yellow covers. These books were gateways to an incredible world. I traveled in sailboats across all oceans, I’ve barely made it through terrible storms, I’ve fought pirates, recovered treasures, crossed deserts, joined the Légion étrangère. My all-time favorites were Jules Verne and Emilio Salgari. Among those, I remember the most are: En las llanuras de Argelia and Sandokan.

Later in high school, I turned to some history books. I read a lot of books about WWI and WWII. I also read Beria’s Gardens and The Morning of the Magicians. During that time, I also frequently bought the Spanish magazine Muy Interesante, which was something like Popular Science in the US.

High school was the peak of my interest in model trains, so I was a subscriber for many years to Model Railroader and Railroad Model Craftsman. They always arrived with months of delays in the regular mail. But each issue was a small miracle for me, and I expected them eagerly every month.

A Spanish literature teacher introduced me to Borges and Fritjof Capra. Borges I loved. All his books are fantastic. One to highlight is The Book of Fantasy, a compilation from Borges, Bioy Casares, and Ocampo on fantastic literature. (Not all of them written by Borges). I also read English classics: Animal Farm, 1984.